Some quick notes about the Glitch Town and the Healer Glitch, which is a way of getting into Glitch Town without getting onto the eastern continent with Fairy.

To start off, an explanation of this and other glitches in the game is provided by Inzult, who as of this writing holds records in Zelda II TAS categories, as well as the New Game+ glitched live speedrun category.

When the game gets confused about where Link is supposed to go, it will sometimes send the player to a fall back map. In towns, that fallback map is known as Glitch Town. The first door in Glitch Town is a door to nowhere... back to Glitch town. However, entering the door corrupts Link's position slightly (shifts it to the left). Entering it five times creates a condition known as 'Scroll Lock,' which lets some crazy wrong warps and other effects happen.

The existence of glitch town and out of bounds warping was known in the old days of Nintendo Power, where it was documented that a player could jump with the Jump spell off of a high building in Darunia, cast fairy when in the HUD, and get into Glitch Town. However Darunia is far enough in the game that it's suboptimal for speed run use of Glitch Town. Enter the Healer Glitch.

How to do the glitch

It can be done on any healer, medicine, or spell lady, but due to convenience and routing optimization, it's usually done on the Healer lady in Rauru, hence the name. To glitch in Rauru, one must stand in right front of the door (with a few pixels of leeway), talk to the lady on the first frame her nose touches the window (she's on each pixel for two frames), then talk to her again on the last frame before she opens the door, and cannot be talked to anymore.

The image above is an annotated version of an image by Inzult posted to the SDA Forums. It shows the pixels you need to press the talk button on, in order to trigger the glitch. First you talk to her while she is walking away from you. The exact timing of when to push the button varies with your input lag.

Then you talk to her at the last frame before she opens the door. In learning the glitch, I would watch her hand as it moves on the brick background. 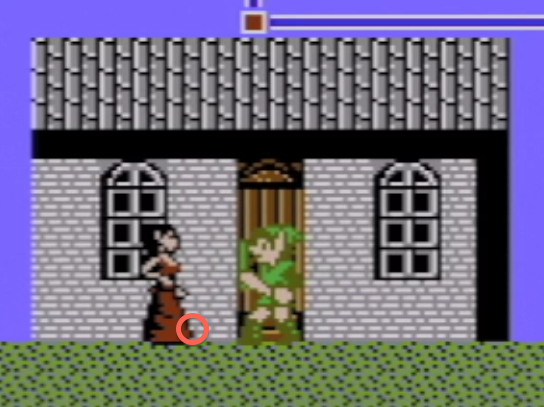 I know I hit the right pixel for the first step if she looks like this after talking to her. I watch the circled pixel. If it's there, alone, then she's on the right pixel. That's not a guarantee that it's on the right frame, since she's on each pixel for two frames, but only one frame is good for each pixel in the trick. But it means I have a 50/50 chance of being halfway to the trick.

What happens with the glitch

If you got the glitch, then, well... this happens. Movie by NMaster64 on the SDA forums, compiling Healer glitch successes on console (both NES and Wii Virtual Console) by a few runners, as well as some theory TAS results on fceux:

What does it mean when she turns around?

The healer moves one pixel every two frames, therefore there are two subpixel positions she can be in, for every pixel she's on.

The healer will not turn around or do anything funny for most combinations of trick failures. However, she will turn around and walk away, instead of opening the door, if you get the first talk frame-perfect (that is, subpixel-perfect), and you get the second talk pixel-perfect but one frame early (that is, on the first and not the second subpixel).

Runner Simpoldood found that if you get the first talk frame perfect, you can then just mash the button to talk to her, talking to her over and over. If she turns around and walks away, keep talking to her, and she'll eventually turn around again, giving you another shot. For those who don't have the rhythm down to get the second talk, it's a fairly reliable alternate method.