Use bombs wisely. A bomb in the center of Manhandla will kill all four petals and kill him instantly. However this is suboptimal in Level 3. What is wanted is for the bomb to be placed off center, with Manhandla moving into the explosion. This way many 'hits' are racked up on the center before he dies, generating a forced bomb drop when Manhandla finally dies.

Manhandla is vulnerable to most weapons, but cannot be Boomerang-stunned.

Cutting off the first head takes 10 hits with the wooden sword, That head will then float around. The remaining head (in Level 4) takes 6 more hits.

Many hitboxes and effects in the game skew to the side. This is particularly evident with Gleeok, whose head hitboxes skew far to the right of the sprites. This means it is best to fight Gleeok on the right half of the room. Aim just to the right of the visible sprite of the head. Yes, this hit him: 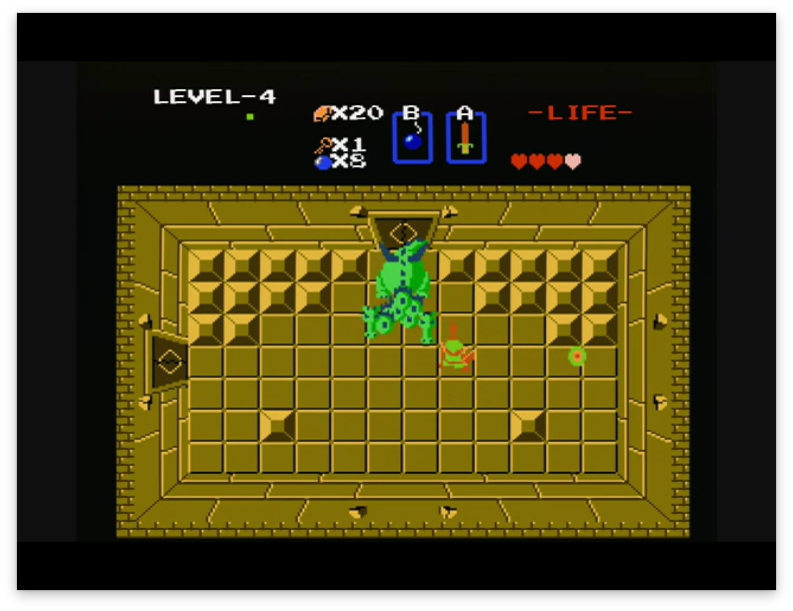 Gleeok can only have one fireball on screen at a time. Use this. Alternate between standing directly to Gleeok's right, and standing below Gleeok (but to the right, as explained above). When a fireball is sent one direction, use its airtime to get in hits from the other direction, and alternate.

Gleeok can only be harmed by the Wand body or the Sword.

Use bombs wisely. Shrunken Digdoggers take two bomb hits to kill. Typically one will lay a bomb, switch to Recorder, blow, immediately switch back to bombs, and finally lay a second bomb. This won't let the Digdogger pieces run away.

Prefer laying the first bomb to the left of Digdogger, as the pieces will skew to that side after the Recorder blow.

Digdogger can only be harmed after using the Recorder, after which he is vulnerable to all weapons, even the Boomerang.

When fighting a three-piece Digdogger, in an emergency you can leave the room after killing one of the three pieces. The boss will count as being killed when you return.

Use bombs wisely. Ideally one wants to get bombs from Dodongo by killing him with the sword (though that doesn't work with Swordless, so just feed him two bombs in that case).

The ideal way to kill Dodongo is to lay a bomb in front of him, a half tile off center of him so he won't eat it. When he walks into that smoke he dislikes, he will freeze. Stab him and get a guaranteed bomb. 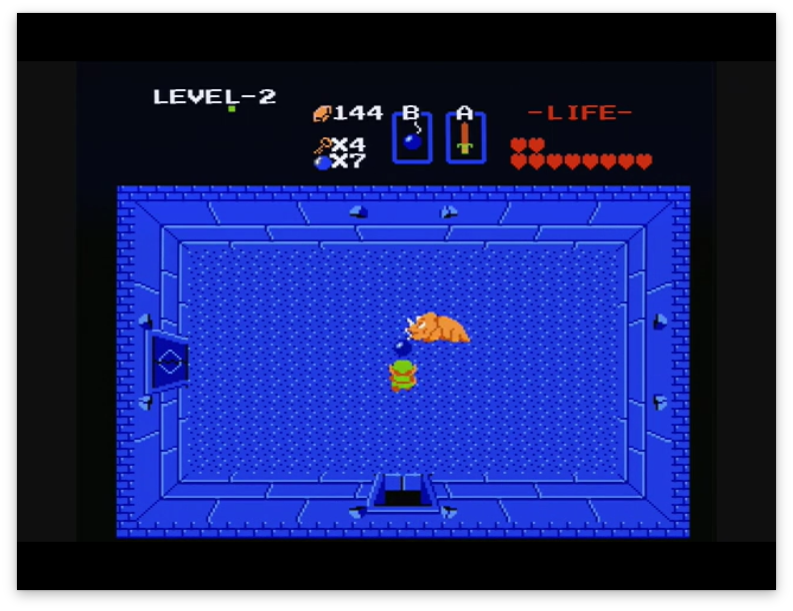 But Trolldongo can be tough to get a bomb in front of. A safer approach can be to feed him a bomb to freeze him, then lay a bomb after so the smoke stuns him for the sword stab. If your bomb misses, wait for it to completely disappear before placing another or he will completely ignore the second bomb.

Dodongo is immune to all other weapons.

Aim for the open spot! How fast you can kill him purely depends on the pattern you get. If he walks forward and opens, fire an arrow at the eye, and you're done.

Gohma is immune to all other weapons.

Carefully time bombs and sword slashes so a bomb goes off between sword slashes, and you can kill him faster than with sword or bombs alone.

Aquamentus can also be killed with the Wand body and Arrows.

Of the eight pieces, one of them is the 'master'. Kill it, and whatever pattern the Patra pieces are in, they will stay in for the remainder of the fight. That's good when the pieces are in the close orbiting pattern. If they're in the 3D attack pattern, shifting will never end and can result in crazy screen wrapping if it goes on long enough. If they're in the 2D attack pattern, the pieces will continuously expand and contract, arguably the single most dangerous Patra situation. So it can be safer to kill pieces of 2D Patras only in the contracted form (in the Any% route, only the first Patra is of that pattern).

If you get to Patra with 7 consecutive kills, and don't get hit, you can force a fairy off of the center piece. Credit to King Hippo for that strategy.

Patra is vulnerable to the Wand body, in addition to the Sword.

Gannon moves toward you in a 'figure 8' type pattern. He's not just warping around crazily. In fact his movement is smooth, as seen in this video by Fred of Randomizer fame. Specifically, Gannon moves 4 blocks at a time before turning 90 degrees toward Link. He reverses direction if he runs into an obstacle. After teleporting, Gannon will finish whatever movement he was doing when he was stabbed; this can cause his pattern to become unusual by changing his alignment within the room.

After you hit him, there is a narrow window after his hit invincibility ends, but before he moves again, away from you before he starts approaching again. Hit him during that window and you can stun lock him. This works if you're hitting him in the lower-left or lower-right corners of the map, because whenever he's hit he will re-spawn in one of those two corners.

When he turns red, fire a Silver Arrow at him.

Note that you can only make him turn red with a sword (any sword, 4 hits with the Magic Sword, 8 with the White, 15(!) with the Wooden). You can only kill him with the Silver Arrow. Bombs, Wands, Arrows, nothing else will turn him red, and only the Silver Arrows will kill him when he turns red. Gannon is therefore the only enemy you cannot kill Swordless, which is why the Swordless run ends upon holding up the Triforce in Gannon's room.

Gannon has a four-tile sprite, but his 'real' position is the top-left corner sprite. That is where he fires his fireballs from, and he will never move into a position where the top-left corner sprite is in a wall or in one of the statues in the corners of the room. This makes it safer to be standing on the far left edge of the room, because it's harder to get hit by his body. Even though Gannon appears large, his actual hitbox is the same size as any standard enemy and is located in the center of his sprite, a half-block down and right of where the fireballs spawn.

If you need to manipulate Gannon's spawn (usually not needed in any% but sometimes needed in low% or if you died to Gannon), re-enter the diamond room before Gannon repeatedly. just enter the underground stairs area, and go back to the Diamond room (the one that has Like Likes, Bubbles, and Zols). Typically, if you go from start straight to Gannon (as though you already had silver arrows), re-entering that room 4 times will get the 'standard' spawn.

Here's how to fight him with the standard spawn, as used in runs such as this one by LackAttack24